In the Easter family there are three generations of Kens in the trucking business, being Ken Senior, Ken Junior, and Ken Junior Junior (known as JJ), along with his brother Matthew, and maybe even a fourth generation with eight-year-old Ken 4 (known as Triple J or K4 by the drivers). And with an additional two sisters and two cousins still at school, the Easter family can certainly claim that trucking is in their blood.

Ken Easter Senior had a small trucking business back in Newcastle when his son, Ken Easter Junior started his own trucking business from scratch in 1976. As his business in Newcastle grew, with trucks running mainly Sydney to Brisbane, Ken J looked at both ends of his truck routes to find a more suitable depot, and understandably picked sunny Brisbane in December 1988.

After being invited to run with one of their drivers between Brisbane and Melbourne to have a decent trial of the company’s new Western Star 5800SS myself, I was able to spend time with Ken Easter Junior’s son, Ken JJ, now the company’s general manager, to learn more of the business and the fleet. 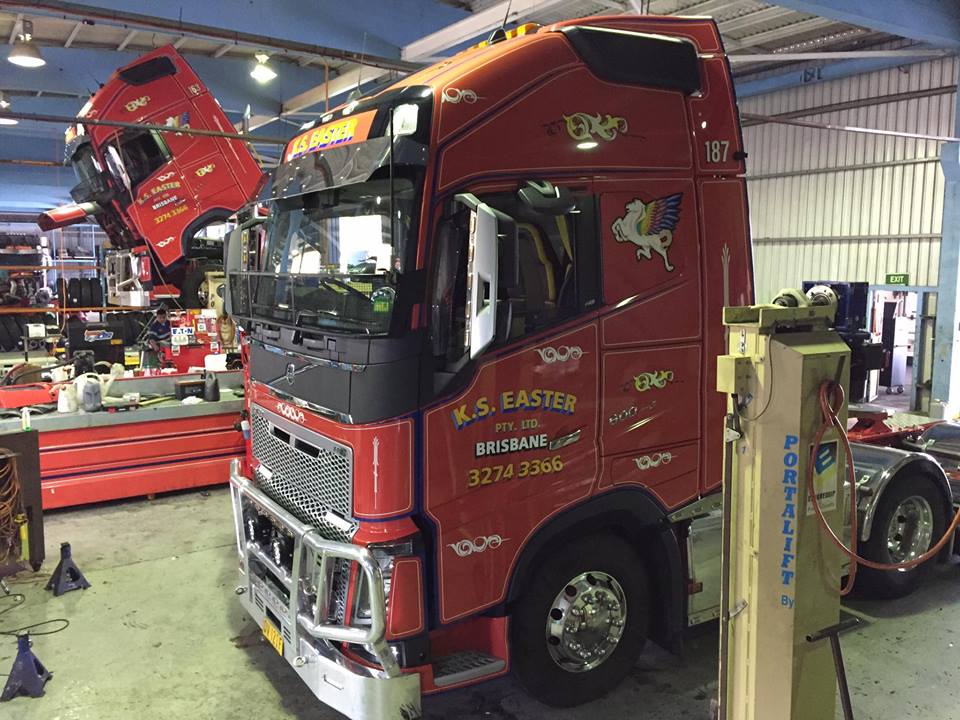 Ken JJ explains that, “Whilst growing up in Newcastle Dad had his own trucking business, and I learnt to drive forklifts and front-end loaders before I even got a car. We probably spent more time helping with the business than we spent at school. I went straight into the company after turning 16 and started with sweeping the yard, loading trucks and then 15 years in operations before management.

“Many of us in this generation have been lucky enough to grow up in a trucking business, spending as many hours as we could riding in trucks or helping service and polish them on weekends for a little extra pocket money.

“But, unfortunately, this has been lost for the next generation of kids as Health and Safety makes it increasingly difficult for the younger ones to get involved. This was often the best way for them to get passionate about the industry from an early age. These days we haven’t as many young guys coming through that are as passionate about trucking or that respect them either,” added JJ.

The family has worked hard over the years during the good and bad times, but has focused on compliance and reliability over the decades to build a strong customer relationship with some of the biggest clients in the parcel business.

Ken JJ’s wife, Karlie, has been a big advocate for transport safety and was on the board of TruckSafe within the ATA. Now as the company’s HR and compliance manager, they ensure that they lead from the front.

“Karlie has ensured that we have all of the accreditation in place, such as TruckSafe, NHVAS, WA Heavy Vehicle accreditation plus others, and is always making sure our guys are on top of everything”. 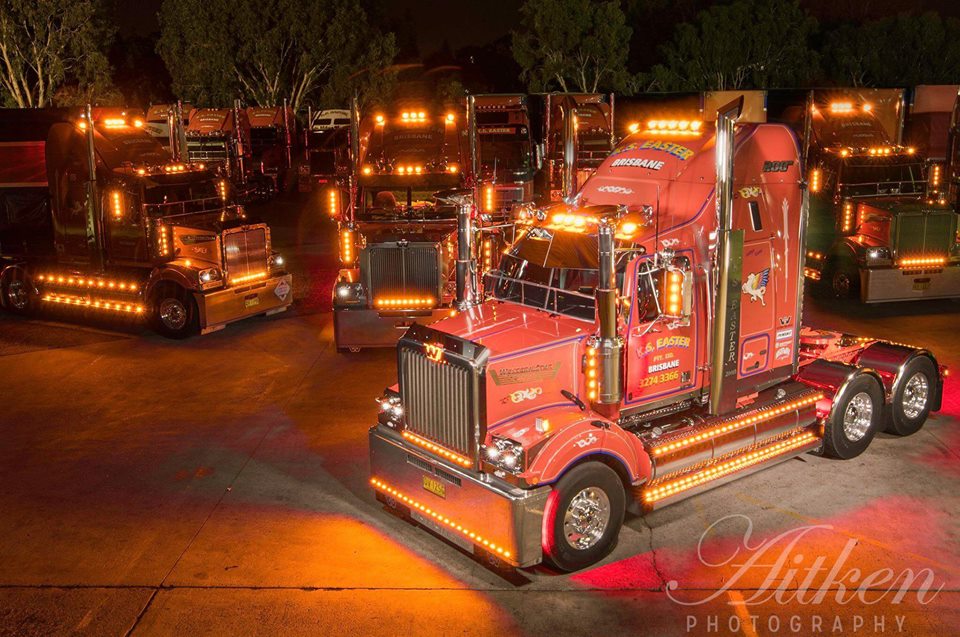 The K.S. Easter fleet also has all of the latest compliance technology onboard. Managed through MT Data, the fleet is fitted with GPS, onboard tablets for information sharing and electronic monitoring of driver’s hours, plus dash cameras facing towards the driver’s seat and also out on the road, for the protection of the driver as well as that of the company.

“The hardest challenge is to ensure the drivers are able to keep up with the modern technology, so we spend a lot of time on training if they need it”.

Over the years, the Easter’s fleet has gone through periods of selecting brands dependent on which model worked best for the business at the time, from a range that includes Kenworth, Mack, Freightliner and Volvo.

In recent years the company has standardised on Western Star and Volvo. Bonneted trucks comprise around 80 percent of the current fleet, with the remainder being cabovers that pull refrigerated trailers or service the company’s clients that operate from depots with limited access dating back to before the advent of B-doubles.

As both the Western Star and Volvo trucks are assembled within walking distance of Easter’s depot in Wacol, Queensland, they are certainly staying local. Ken also comments that, “The support we get from the local dealerships for both brands has been great”.

The decision to trial a Western Star 5800 came as a result of seeing the display at the 2015 Brisbane Truck Show, then later seeing the same truck in Dick Johnson racing colours. After many discussions with the sales team at Brisbane Truck Centre, which is now based at Penske Power Systems, Wacol, they purchased their first unit through Derek Schroff in 2016.

The 4800FXB and 5800SS prime movers are powered by the 14.8-litre Detroit DD15 engine that produces 560 hp at 1800 rpm. Peak torque is rated at 1850 lb-ft (2150 Nm). These are matched to the Eaton UltraShift PLUS 18-speed automated manual transmission and run with diff ratios of 4.3:1. They also come with EBS (as does all the fleet), FUPs bumpers from AJ’s bumper, Western Star springs on the front and Airliner AB46K bags on the drives to go with a GCM of 90.5-ton on CML. In terms of the bunks, they are fitted with the 40-inch Stratosphere sleeper, something that I would get to appreciate on my two-up ride back to Melbourne.

Ken JJ adds, “We’ve been happy with the Penske Power Systems and the Western Star trucks, as well as the Volvo FH600 with the I-Shift for their cabover fleet from VCV. The same applies to the support provided through the service centres of both brands”.

The family has found that sticking with a two-brand fleet works well, especially when keeping workshop stock as low as possible, also ensuring that staff is fully trained on the products.

“We do still run a number of Kenworths in the fleet, ranging from the older Aerodynes, some SARs and T609s plus three T909s, some of which have notched up towards two million kilometres. Although the company has considered adding new T610s, which many are impressed with, we need a good reason to change suppliers when, at the moment, we are happy with the two we have chosen.

“We have found that, with the 5800, the improved aerodynamics do help with the fuel economy, which is good compared to the other trucks. The drivers also like the tighter turning circle and smoother ride, so, as they all talk, more of the drivers are now putting their hands up for the 5800.

“The 5800 should also make a better truck for the secondhand market where they need it to run locally. When accessing shopping centres and running around town it is much better than the 4800,” he added.

For maintenance, K.S. Easter has its main workshop in head depot in Wacol, and with the majority of the fleet returning here for service, they can keep an eye on the equipment. Recently, the company has started to look at extending the oil change intervals using Castrol lubricants, so they are interested to see how this goes. The fleet is all equipped with the Groeneveld auto greasers, which helps to confirm maintenance procedures.

When it comes to trailers, the company is sticking with MaxiTRANS for fridge and dry van needs and with Freighter for Tautliners, all set up for running at 64 tonnes under CML. Again everything comes with EBS as new, and there is a programme in place to retrofit EBS systems to older units.

For the future, Ken JJ sees that the bigger fleets will look to well-placed businesses like Easters for solutions, with compliance being the key in order for them to uphold their own high standards.

“The important point is to ensure you only start with what you need to do the job, and don’t let others dictate your terms,” said JJ.

No doubt the parcel industry is sure to see some interesting years ahead as online shopping continues to grow, attracting giant companies such as Amazon to enter the arena, adding to the mix.